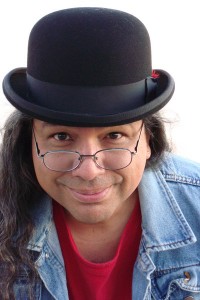 A master of mixing incongruous musical elements into piled high smorgasbords of exotically rocking conglomerations, Hernandez’s 2012 release, Big Pounding Heart, is a project instigated by LA producer, guitarist, Scrote whose own experimental path has led to work with the likes of Reeves Gabrels, Wayne Kramer, Daniel Johnson and members of Ministry. Big Pounding Heart is made up of pop rock songs with worldly rhythms careened through the garage grunge machinery provided by Scrote, delivering a lo-fi crunch like a transistor radio but with a powerful nuclear edginess. “My desire was to sound less conventional. Scrote’s desire was to capture the ‘freshest Bubba possible’. This had Scrote chasing me around the house with low end mics and direct boxes as I played anything bang-able or strum-able in my path.” These instruments included kitchen cabinets, keys, basses, guitars, strummed fans, bottles of wine tapped with spoons and fists pounding on a washing machine.

Hernandez has stretched his considerable talents to embrace both his past and the future. A fourth-generation musician, he allows himself to indulge his Mexican heritage while at the same time building a cultural bridge. “My grandfather, Cenobio I, came to Texas from Mexico to play in the orchestra pit for the silent movies in the early 1920s. With over 100 compositions to his credit, we were fortunately surprised when his piece “Recuerdos” was placed in the 1994 Olympics in Lillehammer as well as in the Oscar-winning documentary, The Personals: Improvisations on Romance in the Golden Years after the music had been mostly dormant for 50 years.”

Considering such a pedigree, it comes as little surprise that Bubba’s own credentials include thirty ongoing years of touring nationally and internationally, appearances in True Stories, The Simpsons, and Late Bloomers. His compositions are featured in radio, television and film including such movies as Day Break, Bullet, Quick, Fools Rush In, Tortilla Heaven, The Ballad of Ezequiel Hernandez and The Lord of Illusions. Hernandez’s productions also include a children’s album All Day Fun with Miss Polly (Maynard). His future projects include collaboration with percussionist/engineer John Bush of Eddie Brickell and New Bohemians.

Bubba travels and performs with well rounded regional players wherever he goes.

No shows booked at the moment.